Well, we officially have a toddler.  We had a lovely fortnight on the mainland and Rosemary went from taking people for walks to walking on her own!

She also discovered a love of "ogog" aka yoghurt.

Oh yes, she also has an insatiable desire to play in the puddles! 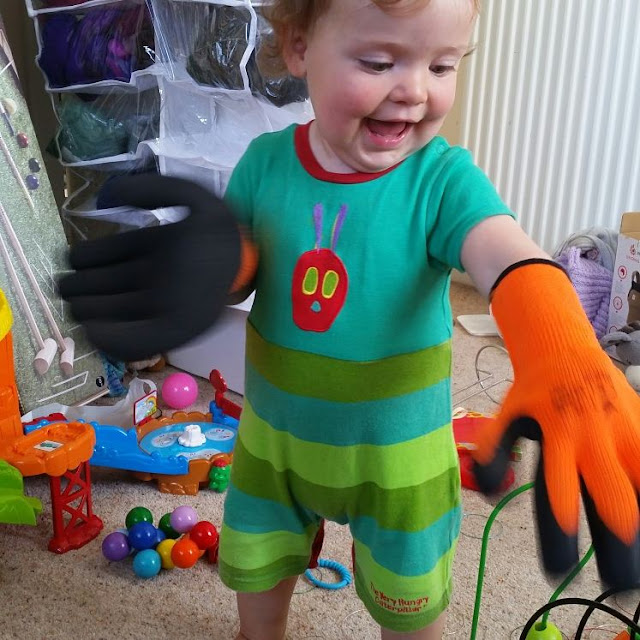 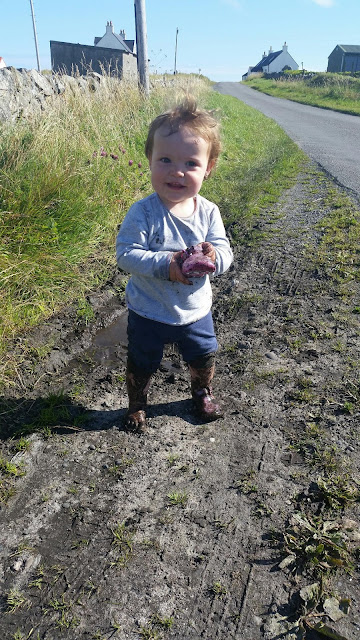 Apologies for the long, long, hiatus. Who would have thought that having a baby was so time consuming? Rosemary is now 13 months and allowing me some time at my computer. I see that Photobucket and Blogger are arguing and not showing my photos. Photobucket is also now horrendous for adverts and user interface, but now I can put photos directly on here. I'll go through and correct links over the coming weeks. For now, have a photo of my very happy girly at eight months: 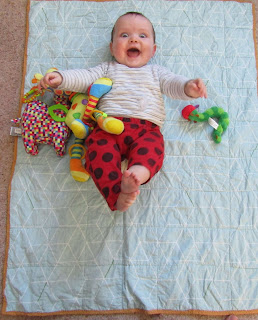 I've been using Instagram and a smartphone for most of our photos, so I'll have to go back and find them all. Happy summer!
Posted by Fluzz at 06:17 No comments:

A visit to the beach

Today the weather is gorgeously sunny, the wind is nearly non-existant, and we have wonderlust.  Cue a trot to the beach!

I still struggle to believe we are within 5 minutes' walk of this:

Rosemary had a sit on a rock:

Just to prove I do exist, here we both are on the same rock.

A little holiday and a baptism

Rosemary is growing!  We've taken the booster cushion out of the car seat and she's well into 6m+ clothes.  The floor is getting frustrating, so we have borrowed this for her to have a bounce in.  She's only had one go so far and spent most of the time just staring from her new vantage point.

Two Saturdays ago was the school Gala day.  Lots of fun was had, the school raised over £2000 towards school trips.  Rosemary stayed awake for four hours taking it all in, and I won a tub of sweeties!

Jo sold his ice cream.  The chocolate was only one cone short of running out, but we ran out of cones first.  The sun shone, teachers were soaked, teachers did a musical performance, and we came home with some strawberry plants.

The following weekend it was time for a trip to the mainland.  We had booked Rosemary's christening/baptism for Wednesday so we decided to leave the Friday before and spend the weekend in Lancaster with my parents and visiting friends.  The weather was wonderful!  My parents have some squirrels that visit their bird feeders, I caught this one in the act of nut-thievery.

There's an orchard and marsh area near them where these cows are being kept.  Lovely walks!

We visited Rosemary's great grandad while we were down. He very kindly put on lunch for us and had a lovely time meeting his great-granddaughter. Rosemary loved it, and zonked in her pram as we walked back to the train.

My Mum and Dad had bought a playmat and Rosemary had a lot of fun lying on it watching us all.  Here she is grinning at Grandma.

We had to check the dress and gown for the baptism actually fit, I don't know how people regularly put dresses on babies; it took two of us.  Excuse the trousers!

We spent Tuesday traveling up to Oban via Glasgow and some shopping.  Lunch in IKEA; bit of shopping in there (and getting lost!), and then a quick shop in Dobbie's garden centre next door.

Wednesday was baptism day.  Granny and Grampy had brought a wonderful, hand made, cake all the way up from Spalding.

The baptism went well, Rosemary didn't wail at being baptised and only got a bit grouchy when she decided she was hungry.  We had cake and coffee at the back of the cathedral and then went across the road for soup and sarnies.  It was a great late morning/early afternoon and wonderful to see friends and family.

After a good snack, nap, guzzle, and zonk, we went out for a walk in the evening.

You need serious concentration when playing with your giraffe, you know.

We spent the rest of the week recovering from our visit and had a chat with the architect about our future house layout.

It's a gorgeous day today.  Rosemary, Pippa, and myself have been for a nice stroll along a quiet side road and now Rosemary is happily playing with giraffe on her playmat; Pippa is passed out in her crate; and I am uploading photos while the washing machine does the nappies.

So, the shed.  The house we're currently in doesn't have a garage or any sort of outside storage.  Wouldn't be a huge problem except the trike needs somewhere and we do have things like lamp oil which are safer stored outside.  So, after poking various websites, Jo found someone who was willing to send the kit via MacLennan motors.  The kit where one box weighed 54kg.  Have I mentioned that crofters are deceptively strong?  There's one who does the MacLennan deliveries, he hoiked the 54kg (that's something like 8 stone) box out of the van on his own; Jo had to unpack it in situ!  Never underestimate a crofter.

And so the bits of shed sat/stood in the house for a bit until the weekend before my parents came up.  That Saturday it was warm and fairly still, and most importantly dry, so Joseph and two friends set to assembling this shed.

I popped out to assist every so often but Rosemary was having a hungry day so I spent most of my time indoors feeding her and changing bums.

The manual suggests that two people will take approximately 6.5hrs to construct this thing.  Nine hours later this was bolted to the concrete:

and the roof was in progress:
<

Why did we have fans plugged in outside?  Believe it or not, they kept the midgies at bay.  Jo looked like he had the measles the next day because of the bitey bugs.

Rosemary wanted to supervise so she came out with her personal midge-proofing:

Sunday afternoon the roof was done and, with the aid of my 6'4" dad, put on top.

and that was how it sat for a day or two.  Dad and I assembled the doors while my Mum sat with Rosemary, and the shed was DONE!

But four 10mm bolts versus Tiree winds?  Yeah, right.  Jo had purchased some marquee pegs and ratchet straps.  We installed one about two weeks ago, and I put the other one over this week after hearing the shed making banging noises in some not-high-for-Tiree winds.

That car?  Prepare to see it driving around Tiree, slowly, and wiggly, I am going to learn to drive.  I've had my first lesson (thanks dad!), but am a fairly long way from driving more than 15mph.  Still, I only stalled twice and kangaroo'd twice; not bad for someone who has never driven before.

We get in some lovely walks in this area and I finally have photos of highland cows!  There are none in easy walking distance of Crossapol, so I lived here for four and a half years seeing only meat cows.  Now we have this one and its pals just down the road:

Rosemary and I have also seen cruise ships off the shore:

One lot visited this week and had a great time, the weather was wonderful for them too.

Autumn is coming though, Rosemary had to wear a jumper at the weekend:

She liked the warmth, but not the restriction to her movement.  Bulky arm seams are a baby's nemesis apparently.

That's it really, we're adjusting to family life; the dog is adjusting to the new house; and I may one day catch up on my sleep.  I'll leave you with a photo of Rosemary chewing her friend, mouton.

We have moved again.  We are now renting a house over in the gorgeous Balemartine.  It's taken weeks to unpack; who knew having a baby added so much time to things?

Babies also add to packing time, and you may find yourself packing the baby...

One sunny day we went for an explore.  Rosemary decided her feet needed sunning apparently.

We had Jo's family up about mid August and Rosemary got to meet her Grampy, Granny, and aunties and uncles, and her cousin!

You wouldn't believe there is three months between them, would you?  He's six months already, closer to seven now.  He had a great time saying hello to his cousin, exploring things, and smothering himself in food!  Broccoli especially, makes great body paint.

We all had a wonderful week and the sun was out most of it too.  Rosemary learned to grip things.

This did lead to her attempting to thieve the yarn I'm using to make her a blanket.

I ordered her a sunhat, but didn't measure her head, need to put in a little tuck I think!

She also had a few goes at sitting on sofas

We had a week "solo", just the three of us with Jo at work during the day; and then it was my parents' turn!

My parents took lots of photos, I just enjoyed the extra bods and Dad's help putting up our blinds and finishing the shed.

Yes, the shed!  But that will have to wait for another post, I am being summoned.  I shall leave you with a photo from today of Rosemary and her giant pal, Peter.

When we found out I was pregnant we bought a load of white sleepsuits.  Partly because they were a load cheaper than patterned ones and partly because I planned to dye them.  Then Rosemary turned up early.

Now I get some time between feeds I have started to dye them.

Attempted "bullseye" style (needs to be a bigger item)

Scrunched up, randomly banded, and soaked in dye:

Rolled top to bottom then dyed magenta with blue and blue with magenta:

I didn't quite make the dyes strong enough so this batch came out a little pastel.  The second batch on the line is most definitely stronger.